Refrigerator Evolution: Our Kitchen’s Best Friend through the Years 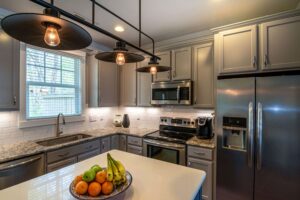 Among all the household appliances ever invented, the refrigerator is probably one of the things humans are most thankful for. Since keeping our very perishable food fresh, cold, and extending its shelf life has never been made this easy thanks to the existence of what most people consider as our kitchen’s best friend. However, just like living organisms; this cooling agent went through an evolutionary upgrade over the years before it has turned up to the version we’ve come to appreciate nowadays. So let’s take a walk down memory lane, and find out how refrigerators have changed from its roots to the most recent models of the decade.

Who Is The Father of The Refrigerator?

Before we check out the various refrigerators through the years, it’s only proper that we first introduce the main man behind this ingenious invention. And it's none other than an acclaimed inventor who goes by the name of Jacob Perkins. Born and bred in the state of Massachusetts, Perkins' passion for tinkering and inventing various machinery was taken from his extreme curiosity with everything mechanical. and, it doesn't come much as a surprise that this mechanical engineer and physicist was given credit for various inventions throughout his life including machinery for nail cutting and heading, the bathometer, and many others. But his most notable creation was creating a refrigeration machine that is used for cooling via a vapour-compression mechanism. And this has become the backbone of our refrigerator appliances nowadays.

Refrigerator: From Concept to Appliance Reality and Beyond

Even before machinery has ever existed, the very concept of using a low temperature to extend the shelf life of food was already practiced through more primitive yet effective means. If you're an outdoorsy kind of person or had the chance to go camping; you have probably noticed that some people would place wine or champagne bottles in a net and immerse it by the riverside. This cooling technique was made famous by older civilizations way back and has been practiced by generations even to this day. But the low-temperature concept made a revolutionary stride from ancient civilizations to this century, and here's how.

The Greeks, Romans, and Egyptians

If you think that the earliest civilizations were already settled with just salting, sun drying, and smoking as a means to preserve and keep their perishables alive and edible then think again. The Egyptians were already clever enough to make use of the frigid night time temperature to cool down their food. They would store their food in large clay jars, you know like the ones you see archaeologists unearth in some Egyptians' tombs. And they would place it outside or on top of their roofs during night time.

Meanwhile, the Greeks and Romans were known for their ice houses which resemble that of a hobbit house from the Lord of the Rings film that has been dug from the side of a hill. The moist soil will then keep the inside of the structure cool like in caves. And then they would painstakingly collect large chunks of ice from nearby bodies of water that have solidified and store it in the ice house which acts as a natural icebox.

During the late 1700's, a professor from the University of Glasgow; namely, William Cullen first came up with the concept of vaporization as a means of artificially creating cold temperatures. The Scotsman then created a miniature skeletal refrigeration machine to prove his theory. Sadly, he never got around into making a larger version of it, but his concept became the base for all of the succeeding inventions leading to our current cooling appliance.

Around the year 1805, Oliver Evans used Cullen's concept but tweaked it by using vapor instead of liquid to produce the same cooling technique. The American inventor then proceeded in creating the first refrigeration machine. But sadly, it was still just a prototype, which is why the title of being named the Father of Refrigeration went to another American inventor named Jacob Parkins instead. And it happened a few decades later around 1834 when Parkins successfully came up with the very first workable refrigeration system through vapour-compression using ether. However, despite getting the patent for this machine, Parkins refrigerator failed to cater commercially.

This failure to meet the public's demand for a cooling device led to the creation of the first iceboxes. Unlike the ones we use nowadays that are made from Styrofoam, these were made of wood and had an inner lining of tin to help keep the block of ice-cold for more extended periods. But it turned into a flop just because people were not that keen on buying ice blocks all the time and continuously replacing the melted one. It's not precisely cost-efficient and practical that time, mostly when money was hard to come by. I mean, would you.

It wasn’t until when the early 1900's rolled in that commercialized refrigerators were finally produced. The Frigidaire Company, a startup business created by William Durant, started making refrigerators that have compressors below. And the well-known Kelvinator Company brand created its version that has a more "futuristic" touch by installing an automatic control system.

But it was the General Electronic Company and their Monitor-Top refrigerator in 1927 who successfully catered to the public's taste, and about a million units were sold. This started the stable market for what is to become one of the must-have kitchen appliances at present. Their version solely uses two chemicals as refrigerants; methyl formate or sulfur dioxide.

For the past years since refrigerators were developed, the main chemicals used for coolants were either sulfur dioxide, ammonia, or methyl formate. And it was during 1928 when Charles Kettering partnered together with Thomas Midgley, Jr. and created Freon. And it's the game-changing chemical that will soon kick out these three toxic compounds from the refrigeration appliance race. But it took a while before it was eventually used for the cooling kitchen appliance, with Frigidaire leading the pack around 1935 when it released their version that’s all Freon.

During the 1940's newer models have a more levelled up look, by replacing the safe-looking older models that have table-top legs with a more solid rectangular refrigerator that has rounded edges. By the 1950's, appliance repair for these kitchen mainstays has become even more complicated with the addition of various innovations such as automated defrosting and built-in ice makers. And it was also considered the decade of refrigerator mania as about 80 percent of American households own this appliance.

By the 1970's the rounded types have been replaced with a more sleek-looking box that has sharp edges. But it wasn't just the design that had a make-over since by this time people have become environmentally conscious after studies showed that Freon was killing our ozone layer and have geared to replacing the CFC compound. Furthermore, energy-saving refrigerators have also started popping out during this decade.

20th Century Advancement and Beyond

When the new century rolled in, technological advancement in various appliances and machinery has become unstoppable. And with the advent of the digital age, refrigerators have become more futuristic as companies began including computerized systems in the device. The internet has started penetrating the refrigerator industry, with some being capable of connecting with WiFi. Meanwhile, others can now be controlled using just your phones. And what’s more, the newer luxury versions are even voice-controlled.

There are just so many improvements we can give to our refrigerators to make life easier. And who knows what kind of upgrade companies are gearing toward these days for our appliances. There's only one thing we do know. With the additional innovative mechanisms, also means that it has become more of a challenge when conducting appliance repairs for them. Then again, we do love a good challenge.